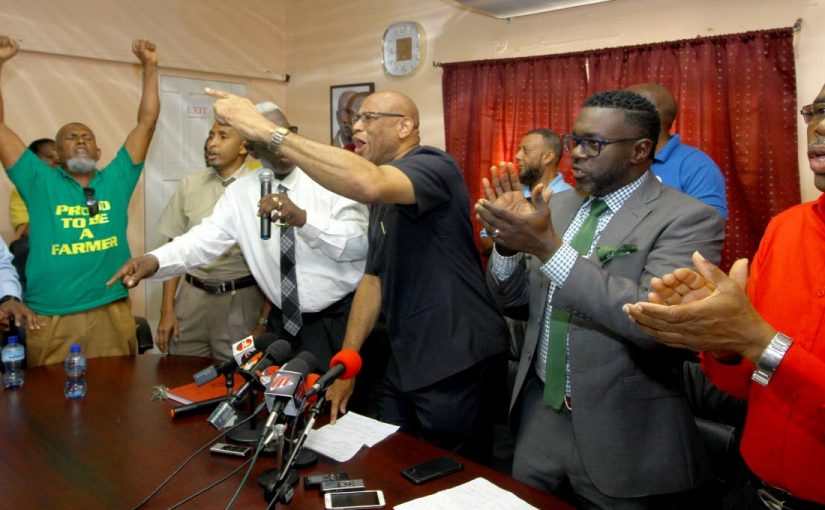 IF workers heed the call by the labour movement for a day of reflection on Friday, it would be a national shutdown in which some people may not even leave their homes for the day.

President of the Sheep and Goat Farmers Association Shiraz Khan said Monday, “Don’t even go out of your house. The moment you go out to see what is happening, they will say people are moving around. chaussures newbalance pas cher

Khan was one of several union representatives who renewed calls for people to stay away from work on Friday. veste canada goose pas cher

He was speaking at a press conference at the office of the National Union of Government and Federated Workers at Henry Street, Port of Spain.

“I am sad and sorry for my country. timberland homme Why is it that people have to be suffering in the country, comrades? Why it is the 99 per cent suffering and Dr Rowley continues to feed the one per cent?” Khan said. During Labour Day celebrations at Fyzabad on June 19, head of the Joint Trade Union Movement Ancel Roget first made the call for workers to stay home.

Monday members of the two other trade union federations, the National Trade Union Centre (NATUC) and the Federation of Independent Trade Unions and NGOs, renewed the call.

Roget accused the Government of threatening the TT Unified Teachers Association (TTUTA) and trying to frighten teachers who stay away from work The union, he said, is standing in solitary with TTUTA, and he encouraged teachers to stay home on Friday.

Head of the Seamen and Waterfront Workers Trade Union (SWWTU) Michael Annisette bashed the Government, saying its decision to close Petrotrin’s refinery at Pointe-a-Pierre was a plan to undermine the trade union movement.

“If the issues are about management, about losing money, about leadership and taking us to another level, well, privatise the Government,” Annisette said. State-run institutions like the Police Service and the Judiciary, he said, are falling apart. moncler jacket soldes “We have taken the conscious, bold and mature decision that the day of rest and reflection is critical and important for the working class of TT,” Annisette said.

Secretary general of the Communication Workers Union Clyde Elder called on union members to continue working together for the benefit of the working class. “I want to appeal to union leaders, let this not be a cosmetic coming-together.